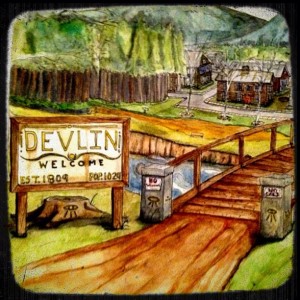 I get asked on many occasions why I’ve spent so much time working on this series before I wrote the book.  Part of it was procrastination, but the biggest reason was the allegory behind the Waking Dream.

When I was a kid, I was very much enamored by H.P. Lovecraft and the Cthulhu Mythos.  The idea of a writer creating a framework for other writers to contribute to was fascinating to me.  And since the story “The Call of Cthulhu” was released in 1926, scores of renowned authors have taken their turn to try to rouse the Ancient Ones from their slumber.

I initially came up with the idea for the Waking Dream in 1995 as a Dungeons and Dragons style role-playing game.  It was first premiered on Internet Relay Chat, where I had over 100 people playing at any given time.  But as I began to write these elaborate story lines for others to interact with, it occurred to me that it would be more useful to write stories and novels, rather than a bunch of rules and dice play.  The Waking Dream began to evolve.

I stepped away from the online role-play world and began to do serious research on how to make the Waking Dream a framework.  But along the way, it started to become something much more than that.  It started to become a philosophical debate on the nature of existence – a subject that has haunted me my entire adult life.  I have for a long time stopped reading fiction, and jumped headlong into physics, cosmology, religion, philosophy, mathematics and metaphysics.  And along the way, I created an entire universe populated by Dreamers, Sleepers and Immortals and solved — in my mind — the answers to our universe.

It does not matter really what comprises the universe, how it came to be, or where it will go from here.  What does matter is the voyage and exploration of the self and understanding that we are all connected at a fundamental level, and the universe is our playground.  We have gone about our search for the answer in the wrong way.  Rather than trying to understand our consciousness and our spirit, we’ve leaped into the abyss, searching for answers in the stars — but the answer is in each and every one of us.

The Waking Dream books and stories and framework are to give us a way to be children again, when we looked at everything with wonder. Magic and Monsters are everywhere, we’ve just chosen not to see them in the same way we once did.  We’ve allowed what we call the “common reality” — what the majority believes to be true — to make us blind to the true nature of the universe and thus, ourselves.

For me, the Waking Dream is not about making money, it’s about throwing a new idea out on the table for everyone to see.  And in turn, I expect others to take up the mantle and submit their own stories about the Waking Dream.  Because, in the Waking Dream anything is possible.  And if we all take a moment to realize the Dream as something wonderful, it will be wonderful.  But at the moment, we are creating a nightmare.

Waking Dream: Devlin is just the first of many novels to come.  If you are looking to escape for just a little while, and you believe in any of the things I have said, I believe you will enjoy walking with me in the Waking Dream.

All about the books I write, along with random thoughts, and babbling.

Mind Grunge by E. Michael Hibbard is licensed under a Creative Commons Attribution-NonCommercial-NoDerivs 3.0 Unported License.
Based on a work at arkangyl.wordpress.com.