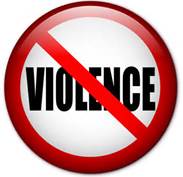 Today I am going to explore a very difficult subject — Violence.  Our world has always been filled with violence.  Some people think things are getting worse, and they are.  It’s also much more visible than it ever has been before due to the media and the internet.  And, sadly enough, violence sells.

One night I did a little experiment.  I sat down and turned on CNN Headline News for about 3 hours.  During the time, I made a little mark in a note-book for every violent and non-violent story I saw.  It was not surprising to me that over 60% of the stories that I saw were violent related.  Why is this? Because we enjoy violence.  It’s not to say that we are bad because of this.  Like Fear, Violence is an instinct and a reaction for survival.  We kill animals because we are omnivores.  We kill each other out of a variety of reasons — religion, race, greed, envy, apathy, righteousness, and most of all, stupidity.

Killing is the most dire of all violence, but we perpetrate other forms of violence as well, the lesser violences.  Spousal abuse, child abuse, verbal abuse, bullying, road rage, vandalism, and sadly, in self-defense.  It is perplexing that we’ve not learned to overcome this.  It is another sickness that plagues our society.  One violent act begets another violent act, a vicious cycle, a butterfly effect.  It is even more upsetting that we commit violent acts completely unprovoked.

I could go on, but all of you know these things happen.  And we all have at one point or another committed an act of violence — even as simple as biting a sibling over a favorite toy or the last cookie.  It is ingrained in our psyche that violence is the last resort, the last answer, when in reality, it is the one thing we should strive the most to overcome.  It is only then that we can focus on changing the world.  But instead, we allow our governments to wage war on one another over silly things.  Every culture on this planet is beautiful in its own way, it is what makes us unique.  It is usually a handful of people who end up defining an entire culture.  We generalize entirely too much, and we hold grudges entirely too long.  Things happen — we should learn from our mistakes and move on, but we have not.

Wars are still happening.  People are still killing, stabbing and maiming one another.  We hate for no good reason.  Everyone has their opinions on how to stop violence.  So lets explore a couple of those.

Gun control, that will solve nothing because if someone wants a gun, they will get a gun, or a sword or a crossbow.  The only way to stop people using guns is to stop having guns produced at all.  But we know that’s impractical.  Sure we can make it harder for people to get guns, but we all know where there is a will there is a way.  Look how well the War on Drugs has worked.  People still use drugs.

Sanctions against countries who are threats.  Well that doesn’t work because it just makes them more determined to have their weapons of mass destruction.  As much as I love this country, it is highly hypocritical to say that one country can have nuclear weapons, and another cannot.  We did drop the first nuclear weapons, but on the other hand we’re saying no one else can have them?  Who are we to say this?  This has only made us a greater target because our involvement in other country affairs makes them hate us all the more.

Religion is absolutely not the way to stop violence, because all the major religions have teachings against violence, yet they have all been involved in acts of violence.  The Crusades, Radical Islamists, The Inquisition, The Salem Witch Trials, The Holocaust — the list goes on.  All these religions believe they are right, and they are entitled to their opinions, but, not one of them can prove that they are right.  Not one.

There is only one way to stop violence forever — each of us must make a conscious decision to not commit an act of violence.  And through this our children will learn that it is emphatically wrong to kill or harm anyone.  Period. No exceptions.  It is only through love that violence will be eradicated, and we will talk about that tomorrow.

So I leave you with this question:  What is one thing you believe we, the human race, can do to end the violence in our world?

What do you think? Cancel reply

All about the books I write, along with random thoughts, and babbling.